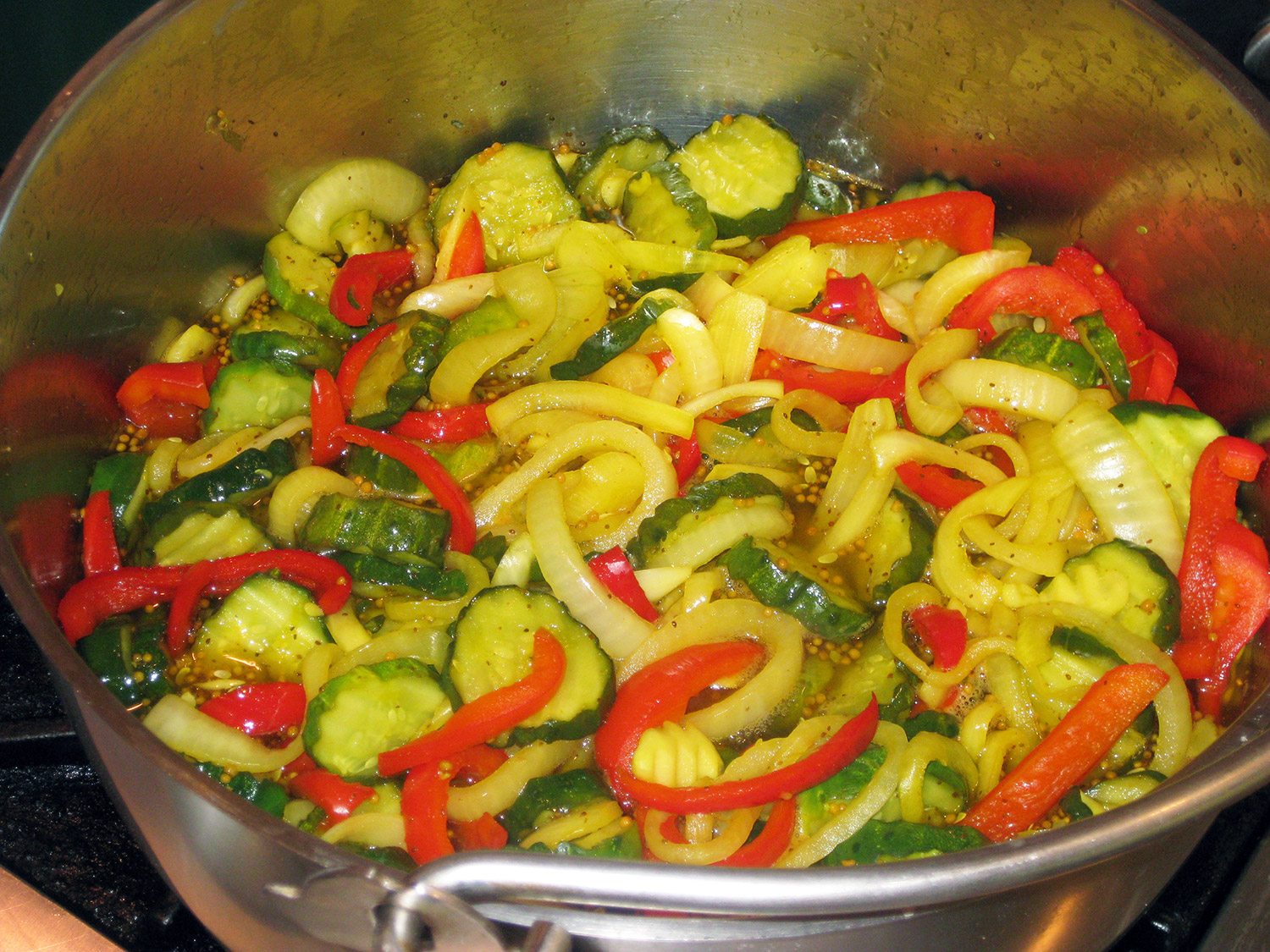 Bread and Butter Pickles, with Onions, Peppers and Garlic

These jars are filled with a fabulous pickled vegetable mixture that we just love. And, in addition to making a wonderful gift, “put up” foods are also a great way to, at whim, revisit some delicious summertime memories. If making pickles and canning is new to you, I highly suggest that you read my blog (will be posted very soon), which has many clarifying photos. If you can’t find the canning equipment in well-stocked hardware stores, go to this online source. I also suggest you read this recipe in it’s entirety, twice, before getting started so you have a clear understanding of the ingredients needed and of the order of steps in the pickle-making procedure.

Place the canning rack inside a large canning pot and fill with cold water. Turn on the heat and, once the water boils, reduce the heat so the water maintains a simmer until needed. Run clean quart and/or pint jars through the dishwasher and leave them inside until ready. Or, using canning tongs, lower the jars in the pot of water, upended side up, after it comes to a boil. If so, bring the water back to a boil, after adding the jars, and turn the pot to a simmer until needed. Fill a 4-quart pot, half full, with water and bring to a boil. Reduce heat to low, add the screw top discs and bands and also stick in your ladle. Maintain a below-simmering status. (While the water is heating in both pots, you’ll be working with the vegetables.) In a separate pan of simmering water, steep the top to the jars (the discs and screw top bands). Add to the water, the bowl-end of a ladle , a thin heat-proof rubber spatula and also the rubberized ends of canning tongs. Make sure your wide-mouth funnel is very clean.

To salt and soak the vegetables

In a large, nonreactive bowl, combine the sliced cucumbers, garlic, onions and 1/2 cup pickling salt. Mix well with your hands and allow the vegetables to stand for 1 hour. Then, cover the mixture with cold water and let stand, uncovered, for 1 1/2 hours. Meanwhile (just after adding the water to the vegetables), in a separate nonreactive bowl, combine the sliced peppers with 3 tablespoons pickling salt and let stand for 45 minutes. Cover the peppers with cold water and let them stand for 45 minutes. (All of the vegetables will be ready to proceed at the same time. ) Swish the vegetables around with your hands, then drain both in a colander, shaking well but do not rinse.

To pickle the vegetables

In a 10-quart, nonreactive pot, whisk together the vinegar, water, mustard seeds, celery seed, turmeric and sugar and bring this to a boil. Add all the drained vegetables to the boiling liquid and stir well to combine. Bring the liquid back to a boil at the center, stirring occasionally to make sure it’s all very hot.

To set up to process vegetables

Place a large, wire cooling rack on your counter. Place a clean kitchen towel over the rack. Lay another towel to one side of the prepared rack and lay the drained discs. If the jars are in the simmering water, use canning tons to carefully remove them, draining them completely. If in the dishwasher, simply remove them and place them on the towel (remember, the jars should be very warm to hot before being filled.) Place the jars, opened end down (for now), on the towel. Bring the water in the canner back up to a boil, then invert the jars, open ends up. Using the sterilized ladle, transfer the hot vegetables into the jars. Ladle the pickling liquid into each jar, dividing evenly, so the jars are filled (leaving 1/2-inch of headroom at the top). Take the sterilized rubber spatula and run it down the side of the filled jar to remove any air pockets from within. Immediately place the drained disc on top of the jar and screw on the band–not too tight! (If using any other type of tops on your jars, sterilize and apply to jars following the manufacturer’s instructions).

To process the jars

Uncover the pot of boiling water and, using canning tongs, carefully lower the jars (one at a time) into the pot and onto the rack. After all the jars have been added, they should all be covered by at least 1-inch of boiling water. Cover the pot and, when you see steam escaping from under the lid, begin timing. Process the jars for 10 minutes, once you see steam. (The heat should be high when processing. If, however, the pot begins to spit water from under the lid, reduce the heat a bit to help to calm things down. The water should, though, always produce rapid bubbles.)

While the vegetables are being processed, clean up the area where you filled the jars. Replace the towel on the rack so everything is, once again, very clean. After 10 minutes in the boiling water, uncover the pot and turn off the heat. Using canning tongs, lift the jars out of the water and bring them to the towel lined rack. (It’s a good idea to, while using your working hand to secure the top of the jar with tongs, hold a folded towel in the other hand and rest the jar on the towel as you walk to the rack.) Stand the jars, right side up, on the towel-lined rack and let them cool undisturbed for 12 to 24 hours. Soon after removing the jars, you should hear a series of audible “pings” indicating that the seals on each jar are secure. (You won’t always hear this, though. Most important is that the tops of the jars are not bulging but are, somewhat concave.) Place the cooled jars it in a dark cool place for 1 month before serving. If done properly, the jars will keep for 1 year or longer.

If when you open a jar you see a foaming substance or smell a foul odor or if the lid is bulging before opening, do not taste it to see if it is alright…. WHEN IN DOUBT, THROW IT OUT!!